My Life on a Shelf 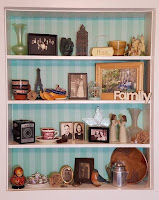 Yesterday, I had fun adding some cute paper to the back of this built-in shelf in my living room. As I was putting things back in place, I realized how many people contributed to the items here and how much of my life’s story can be told.

As genealogists, so often we are focused on other people’s stories and forget about our own, so here is bit of my story and just some of the people in it.

1. Great-grandpa John Erickson and his children.
2. The gargoyle was a gift from my college history professor. I was his TA for 2 years and he and his wife were part of a trip I took to England, Scotland and Paris. What made the trip extra special was sharing it with my cousin Liz.
3. From my friend Brenda. We exchange Christmas ornaments, but "Hope" stays up all year.
4. A mug made by my sister, Britt, given to me during the years I owned and operated a coffee shop.

5. A gift from one of my former coffee shop employees who went to work at a school in Peru.
6. Actual foot-binding shoes from a college classmate who was a missionary in China.
7. Great grandparents Cecil Lloyd Walters and Emma (Ransom) on their wedding day.
8. A bird cage and baby’s breath that Mom and I used as part of the decorations for a bridal shower for our friend Ellie. We were so honored to have helped! The burlap roses are also from the shower.
9. A favorite photo from a family get-a-way to Duluth a number of years ago. We set out on an unknown road and found a fun bridge and hiking paths.

10. A camera from a day antique shopping with Brenda.
11. Pen nibs and a container. I’ve always been fascinated with old pens and nibs. When Grandma Erickson moved out of the farmhouse, the family was invited to take some keepsakes and this was something I chose.
12. Grandparents Chuck and Marion Walters.
13. A star made by my cousin Kristina.
14. Great-great grandparents, Victor and Nellie Vidlund.
15. “Sisters by Heart” from my sister, Tami.
16. A small jar found by my parents between the old walls in a house we lived in (and they renovated) in Wells, MN.

17. A nesting doll Dad brought back from one of his mission trips to Belarus.
18. I used to buy a tea set on every family vacation. This one Tami surprised me with after a fun visit to a museum near where she lived in Virginia.
19. Great-grandpa Fred Wendorf’s World War 1 id tag.
20. Grandma Lorayne Erickson
21. A watch that belonged to my Great-great Grandma Amy Phares, given to me by my aunt Jackie
22. Great-great Grandparents John and Eva Lundeen
23. A bowl from my cousin Kimberly, given to me after a mission trip to Africa.
Plus, scattered throughout are several antique shop and garage sale finds made with Mom.

This past winter I went through a bit of “Swedish phase.” I’m not sure what triggered it, but I’m half-Swedish (with both my parents being the same), so it was bound to happen. I bought a Swedish cookbook, made Swedish recipes, and had a Swedish day with my sister as we visited the American Swedish Institute in Minneapolis, had Fika and ended with a trip to IKEA. I also took full advantage of a free weekend offered by ArkivDigital, a website with amazing Swedish records. If you aren’t familiar with the old church records from Swedish, they are quite amazing when it comes to genealogy resources (at least for the locations I’ve researched).

Once you find the right family, it can be quite easy to trace family members back thanks to a system of cross-references across different volumes and record types.

Although I don’t know Swedish, with some online helps, I was able to quite confidently trace my way from person to person, generation to generation.

Now we come to Peter Didricsson.

Peter is my 5-times great grandfather. He was born on 16 March, 1776 in Tingsås, Kronoberg, Sweden. He moved to Räveboda, Urshult (parish), Kronoberg (county), Sweden around 1804, about the same time he married Ingjerd Månsdotter, a widow with a young daughter. Peter and Ingjerd had 5 children.

Peter worked first as a tenant farmer and later owned a farm in Rossvik Storegård and Buskahult Tykagård, both in Urshult parish. Then in 1821, Peter and his family moved to Hösjömåla where he was once again renting a farm. It was while looking at a 1821 entry in a household examination (books used by the church to keep track of the people and a major genealogical resource), that I noticed a notation for Peter that read mördad. I pulled up my handy cheat sheet of Swedish words and literally gasped to see it meant “murdered.”

Of course I only wanted to learn more. It didn’t take me too long to find a record of his death on 13 November, 1821. Unfortunately, it was written in an old Gothic style of writing, making a translation (even with the help of Google) impossible for me. Fortunately, I have found a group of very helpful fans of Swedish genealogy on Facebook who know a lot more about these records than I do. Within an hour of posting my inquiry, I was given a translation of the short death entry:


(It was also suggested to me that since he was murdered, it might be possible to find court documents. I will have to do some more digging and see what I can find. Stay tuned!)

Peter was 45 years old when he was killed, leaving behind his wife and children ranging ages 3-16. Life appears to have continued to be hard for the twice-widowed Ingjerd who later appears as utfattig (beggarly, impoverish). She died on 24 March, 1843.
Posted by Nellie at 7:16 PM No comments:

My grandmother, Marion (Lundeen) Walters was a grade school teacher. Much of her teaching career was as a first-grade teacher in Annandale, MN. Early in her career, however, she taught in a one-room school house at Camp Lake School near her home in Albion, Wright Co., MN.

During her first year in 1949, the pastor of the Albion Evangelical Free Church, Rev. Joy Cummings, came to the school with his movie camera to film Marion and her students.

My grandma died before I was born, so this video is very special. What fun to be able to see a little of her playfulness and "the look" I've heard so much about.

A few years ago, my mom had the film digitized. (There is no audio). Enjoy!

Nellie
I love researching my family tree and this blog is a way I can share some of the fun facts and interesting stories I discover along the way. It is also a chance to share some of my favorite family photos. I don't post as often as I would like; hopefully someday I will write on a regular schedule. In the mean time, I hope you enjoy what I posted and I'm looking forward to connecting with any cousins who come across my blog.